Aspen, Colorado was the approximate location of the last two 14,000 mountains I would be climbing to reach my goal of summiting all 57 that the State has to offer. I saved the two most difficult for the end, thinking that my vast experience would give me an edge. As I discovered, they were not as difficult as they were terrifying…but that revelation came later.
First of the last two was Pyramid Peak located in the Elk Range. We headed out from the trailhead at 4AM wearing headlamps and by dawn we were making good progress. 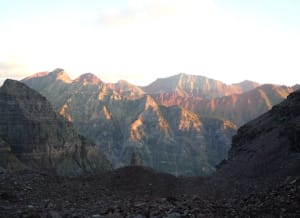 As we worked up the first steep section, the peak came into view. Pyramid’s reputation of having abundant loose rock, 1,000-ft exposure in many areas, and trail finding challenges were good reasons to hire a guide… Being a prudent man, that’s exactly what I did.

Meet Nick Laws… Above his head is the first stretch of the rock climbing we had to do as we started toward the summit. Because this was much more serious technical rock climbing than I had experienced in the past, I had to rely on Nick for some much needed instruction to keep me safe. Many of these sections had “straight up” terrain, but between Nick’s amazing teaching skills and my commitment to staying alive, I almost felt like a real rock climber after our first climb together….

….But it’s not likely I will ever be as good as these guys!!

At 9:00 AM we finally reached the summit on a spectacular day!! It is such an incredible feeling that all you want is for everyone you know to be able to experience that very moment with you!

We had a couple of friends crash our summit party… or were we crashing theirs??

Hanging out at the top with our new buddies was fun… but then I remembered that I had to go down!
Here it drops 3,000 feet to the valley floor below.

Below is a shot of two other 14’ers that I climbed several years back known as the Maroon Bells, outside Aspen.

Onward Ho… and safely down we go!! We arrived back to the campsite at 2PM, 10 hours after we started. Behind me is another shot of the beautiful Maroon Bells, the most photographed mountains in Colorado.