I had read all about it and looked at too many pictures to count… and now here I was with it looming straight in front of me. Little Bear…. a 14,000 ft peak (14’er) rated among the 3 hardest in the State of Colorado. If you have followed my 14’er adventure for the past 13 years, you know that I set a goal when I turned 40 to climb all 58 in Colorado. As of this writing, I have successfully summitted 54 out of the total of 58. But Little Bear has been weighing on my mind for several months now because of the difficulty. That’s it in the photo directly behind me. 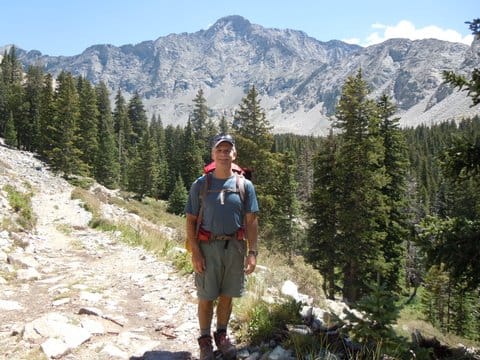 The game plan was to backpack up to Lake Cumo and set up a base camp to ascend Little Bear the next morning. This is a nice shot of the lake with Little Bear in the background.

I awoke at 5:00 AM with a plan to leave camp at 5:45. I wanted to get ahead of anyone else that might have been climbing that day. The crux of the route is the last 1,000 vertical feet. It starts out with a section called the hourglass which is about 400 feet. This picture shows a fixed line rope that works great for stability in some of the steepest sections. To make it even more interesting, there is a stream running down the right hand side!!

Once you get past the hourglass section, there’s another 600 vertical feet of climbing left to the summit. This section is not quite as steep but as you can see from this next shot looking back down, it is still crazy steep. The trick in this section is not to slip and send any of the loose rock tumbling down the mountain because everything funnels into the hourglass section. Now you know why I wanted to be the first one up!!

The second shot is of two other 14’ers–Blanca and Ellingwood Point– that I conquered several years back.

The next shot is looking back on Lake Cumo where I started 2,500 feet below….looks like we are looking at it from outer space!!

As I descended back through the hourglass I ran into a gentleman from Syracuse on his way up so we traded places taking pictures on the rope!

Heading back to the lake I ran into some friends….a family of Big Horn Sheep. A fitting end to an awesome experience!!